While essentially palliative, focal radiotherapy remains the primary approach to treating DIPG and results in symptom improvement or at least stabilization for most children. Standard treatment generally consists of 1.8-Gy fractions delivered once daily, 5 days a week, for a cumulative target dose of 54 Gy. Hyperfractionated doses up to 72 Gy have not shown improved efficacy in pediatric patients, and hypofractionated radiotherapy may lead to slightly inferior outcomes.1 In some brain tumors, protons are superior to photon radiation because they can spare nearby normal brain tissue from potentially harmful effects of radiation. However, they have not been shown to have an advantage in the treatment of DIPG. More patients demonstrate a clinical response to radiotherapy (85%) than an evaluable radiological response (50%), but little or no correlation has been shown between radiological response and either clinical response or survival.2 The benefits of radiotherapy last an average of 6 months.

So far, clinical studies of radiosensitizing agents such as cis-platinum,tipifarnib and gadolinium texaphyrin have not shown any benefit versus radiation alone. 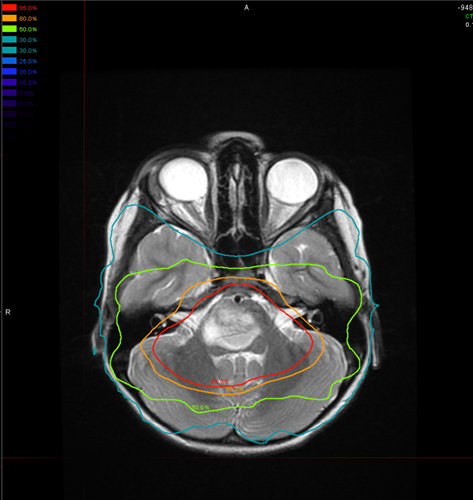 Clinical studies of chemotherapy – given during and after radiation – have examined multiple conventional agents including high dose chemotherapy/autologous stem cell rescue as well as multiple targeted agents (e.g. VEGF-inhibitor bevacizumab, EGFR-inhibitor erlotinib or gefitinib, tyrosine kinase inhibitor imatinib) without showing improvement in survival. Frappaz et al. have published data suggesting some improvement in median overall survival with pre-radiation high-dose methotrexate, BCNU, cisplatin, and tamoxifem, but long-term overall survival was still poor, just 4% at 3 years.3 Massimino et al. reported on three protocols incorporating neo-adjuvant chemotherapy: the median overall survival was 9-13 months, but a study using vinorelbine reported two long-term survivors, alive at 31 and 48 months after diagnosis.4 A Children’s Oncology Group study of temozolomide concluded that there is little justification for using this agent alone or in combination with other agents in DIPG.5 A recent Phase I study of the VEGFR2- and EGF-inhibitor vandetanib from St. Jude demonstrated poor outcomes overall but two-year progression-free survival in a very small number of patients.6

Post-radiation chemotherapy has shown no benefit. The benefit of chemotherapy at relapse remains uncertain. Chemotherapy for pediatric DIPG patients is best approached in the context of a clinical study. To date, the treatment approach for DIPG patients is still very heterogeneous and only a minority of patients are included in clinical trials. Given the rarity of DIPG, there is a shift towards (inter-)national trials to facilitate the identification of potentially effective therapeutics in the future.